First race of The Season, Done and Done!! 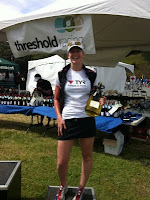 This weekend would be the first tri of the season, an Olympic distance tri close to home in Morgan Hill. Gorgeous place!! I love racing there, but back to the details. I am in solid prep for IM Texas and went against coache's better judgment and decided to ride 5 hours (easy) with a girlfriend on Saturday. I had second thoughts about the ride while doing it, but know that this was a part of the bigger picture and just would let the race on Sunday be what it would be.

Race morning and I was PSYCHED! I was super excited to race, the weather was looking good, breakfast went down easily, I had my friend Anne with me for the day and after the race I was off to celebrate my niece Fiona's first birthday and that meant cake! It was already a good day!

I was excited for the swim as I have been really WORKING it at the Santa Clara Masters and knowing (OK, hoping) it would pay off. On top of my hard work, I had my nifty new TYR Sports Hurricaine 5 wetsuit. Can I just say this thing made it feel like it was assisting my arms go around...not the normal restricting my arm movement. Seriously impressed and another sure sign of a good day. Into the water all the women went, and it was all smooth sailing until we turned to round the buoy and then it got choppy. No worries here and I ended up coming out of the water with the front pack of ladies. Into T1, off with the Hurricaine and onto the Orbea!

I had prepped myself that the bike may feel crappy due to my long ride the day before but I got on and knew there were a few women ahead of me and I wanted to get them! The legs were a bit pooped but I had Mark in my head telling me to be the most efficient rider on course and to never relent. It took me until mile 20 to get into the lead slot for the women and I rolled into T2 with my team mate and friend Erin.

Holy moly were we out of there and onto the run in lightning speed...being set up next to each other in transition was definitely good for us, we were no non-sense. We took the first mile at a 7 minute pace and I was excited...even in Olympics I usually can only run my half IM pace, so things were looking up. The first hill did come and that's when I felt the fatigue of the day and the previous day's ride. Ohhh Buddy!! OK, mantra time. Quick, light steps. More positive self talk and we were rolling again. I managed to hold on to 2nd place overall until mile 4 of the run, and this is where my not so rested legs were defeated by my awesome team mate Erin! She took those last two miles and crushed them...I was just praying (and looking behind me often) that no one else would come by.

Sawheet! 3rd Place Female Overall and 1st pace in my age group. Best of all, I won the bike prime of the day for having the fastest women's bike split and got myself a gift certificate to Sports Basement...now I have to decide what to buy!!

Overall, a great day out. Shook out the cobwebbs, got some sunshine...had some pizza, caught up with friends and then got to go hang out with Fiona and crew for her first birthday. She wasn't as impressed with my results, she was all about her Strawberry and whipped cream cake. 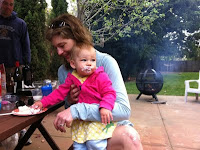 Next up is Wildflower in two weeks time and then we start the slowdown to Texas. I can't wait to see you all out there!

A special thank to TYR sports, Pacific Bicycle and my coach Mark for all of their support this season. It's gonna be a good one! 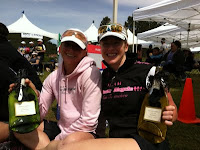 Tour of Flanders, 155 miles of fun in Belgium 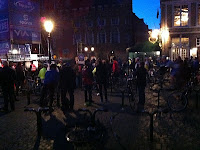 So about six months ago, Mark's friend Craig mentions going to Belgium and riding the amateur Tour of Flanders and then watching the pros the next day. Mark mentions it to me and BOOM we are signed up like that. Who wouldn't want to go and ride the entire 250k course, the same one the pros ride, with thousands of other passionate cyclists and then watch cycling where it's treated like the super bowl(more to come on this)? I told him it was the opportunity of a lifetime, which he thought may have been a bit of an overstatement but never the less we agreed this would be a very fun if not epic adventure.


We booked our tickets to Amsterdam and hung out with friends for a few days before heading to London to shop and hang with Mark's family before heading to Belgium for the ride. The weather is notoriously terrible in Belgium at this time of year and most of my memories of the TOF include mud covered George Hincapie and wet slippery cobbles. So I had prepared myself for an "epic" ride in the cold, windy, wet Flanders. Imagine my delight when it turned out to be sunny and in the 60's.

The ride has an optional roll out time from 7-8:30 ad we ended up rolling around 8. I knew this was going to be a long day in the saddle even though there would be groups so I would not waste a ton of energy but I was ready for the long haul. The first 60 miles were like the Saturday Spectrum ride here in Palo Alto, full of cyclist moves like sprinting out of turns and up hills after relaxing on the flats. Note: triathletes are not built for these "small" accelerations and I was feeling if this continued I may burn all of my matches before mile 75. Luckily an aid station appeared, I had a few DELICIOUS Belgian Waffles and we motored on. My favorite part of every aid station were the pee buckets for the men. Now if we could just have these at triathlons, the lines would move much more quickly and the ladies would be happy.

We continued to ride with groups, every time they would read my shorts and see the Pacific Bicycle logo and San Francisco. It would start in other languages and pretty soon I would hear "San Francisco" and then they would ask me if we had really come all this way to ride? Could it be possible? I think we won the award for furthest traveled for the Ronde. It was great to chat with the guys (I only saw maybe 5 other women ride the whole thing) listening to how many times they had ridden it and that this was some good weather we were having. Based on this, Mark and I think this will be a one time experience. Why go back when it was perfect the first time?

The famed hills don't really start until after mile 100 and then they come fast and furious, but the cobbles are along the entire route. They were novel for the first two sections, as I likened myself to Tom Boonen climbing up the Muur and then the pain and shaking and my power tap computer breaking off came and by the end of the 155 miles I was making animalistic noises as I went over the cobbles and getting angry. Good to find out how to channel the anger, but not so fun while happening. You go from flying on the flats to riding a flat section of cobbles with massive power going 5 miles an hour. My hands hurt for days after. Every time a turn came, you could tell what was up next...here we go again! 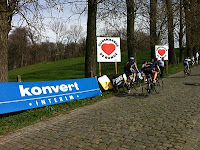 The spectators were amazing even for us amateurs, I imagine they were out there staking out their spot for the next day...not really there to cheer me on, but I just kept telling myself I was winning! On the most famed climb, the Kapple Muur I had given myself permission to walk if needed- the road is narrow, I had already ridden 130 miles...but then I got there and I had to do it. Thank God for crowd support. I started to falter and VOILA a push on the butt from a kind spectator and then cheers for being a girl riding the Murr, I couldn't let them down now! Ahh, the sweet feeling of satisfaction. I felt like a pro as I grit my teeth to get up that wall, it was good.

The top the Murr and just about 20k to go. We are almost home and I am feeling good. Still lots of energy and can't believe how quickly the day has gone by and how much fun Mark and I have had together all day long...these types of rides can test a couple for sure and we passed with flying colors. The last 12k is down hill and we power on home to the finish where frites await. We may have had two portions. Frites with mayo? Always a post ride favorite.

The next day was just as good. We watched the race live in a pub where there were other cycling fans. The entire country treats this day like Super Bowl Sunday and does the drinking to prove it. I have never known the fun of sports bars until this trip. Having fun drinking shouting at the TV for your favorite athletes to attack is a GOOD time. We will definitely go back to watch more cycling in Europe, it feels like home. 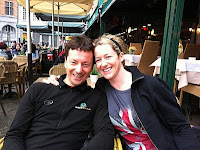 This day was unbelievable, gave me confidence that my endurance is there despite many shortened rides due to rain. Ironman Texas is only 7 weeks away and things are looking good.
Posted by hailey at 6:07 AM No comments: 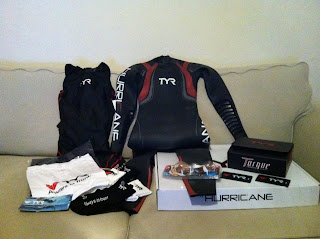 After some very hard work, I have successfully gotten sponsorship from TYR this season! I am so over the moon with this development, that I must talk about it. I have been wearing TYR since it came out- I am aware this may date me a bit. I still wear the old faithful of goggles, the TYR Race-Tech even though there are many other high tech options available. But now I have THE most advanced wetsuit and skinsuit on the market in my arsenal of speed weapons! And socks and t-shirts and tattoos too :) I feel so special. And I can't wait to test the Hurricaine out next weekend at the Reservoir Tri here in the South Bay for my season opener. Now let's just hope my fitness can keep up with my wetsuit!

I am actually excited about the swim as I have changed masters programs this year with the moving south and am swimming at The Santa Clara Swim Club, yes that club where early on in my days there I hear in the locker room "Laura, congrats on your world record" to the lady in the next lane over (OK, she's two lanes over, but we go on the same send off). So with all of the world record holders and pros in the vicinity, I have been pushing myself to swim faster than I think I ever have. I am pumped to see what has come of all of this training and early morning goodness!

Pics to come of the new wetsuit in action on the 17th at the Reservoir Triathlon.

Next report will be of the Tour of Flanders, my quest to kiss Tom Boonen and our epic 155 mile ride through the heart of Belgium.
Posted by hailey at 4:02 PM No comments:

All Things Swim By: